Camping and Offroad Journeys in Montenegro

Aug 9th so to pick up where I left off I arrived at my 100th country of kosovo  and stayed in the capital city of Pristine.  Now the city did not really offer anything special but I found north of the capital where there is some waterfalls and then another city called Peje which has a canyon. So first stop straight to the waterfalls.  It was a short hour n half drive. I arrived at like 10 am and no one was really there. So I got my climb on as I scaled the first bit of this mtn to over look the waterfall.  Then walked further to 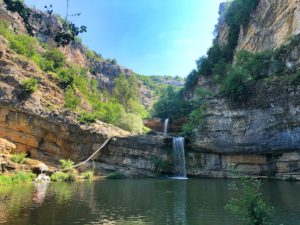 the next.  I was told there is 5 so I carried onto the next one which was a bit tricky then the final was two in one where you did some real scaling of the mtn.  It was a bit sketchy being solo I felt but I did make it and decided to kick back for a few and enjoy the views.  After awhile about a hour I’d say I started to hear voices so I figure the masses must be coming and sure enough as I 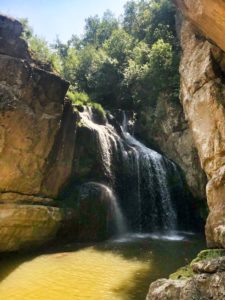 and theres the big guy

arrive back to waterfall 3 there was a group of 5.  I passed back to water fall one and there was like 6 people. In which I of course bothered one person to take a Photo of me.  Then as I made my way back to the bottom I probably passed 4 more people by the time I arrived at the bottom all the chairs were completely filled with people.  Truly glad I arrived when I did.  So back on the bike continuing north to the city of peje.  There was a cave there but honestly I was getting antsy to be in Montenegro. So I stop for a water walked down inside the canyon grab the photo and decided to say Fuck the cave i am gong to Montenegro.  Got to 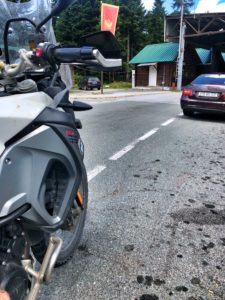 back in Montenegro for the 3rd time

the border in and out and on my way to this horizon unlimited meeting.  I rode for about a hour n half 2hrs before I needed to make my turn towards camp. (Side note my GPS could not find camp so I just drop a pin on where I thought it was). So up this tiny little road into the mtns.  Eventually I would hit gravel about 30 mins in n started cruising through puddles n tearing around falling trees in no mans land. Now the German guy I met at the border the day before did give me a heads up that it’s about 30 min drive off road before arriving at camp.  Well I been cruising for a hour n I eventually come to a huge pile of lard stones in the 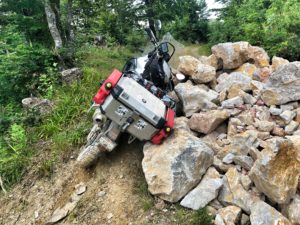 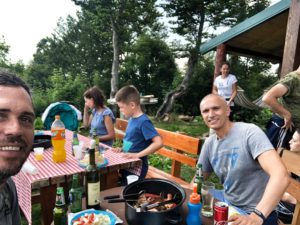 the amazing family the helped me out

way.  I stop take a look n think well if I take off my bags I could squeeze by.  Now it’s a good 20ft steap ass drop to the left but eh it’s called adventure riding so Fuck it I’ll try not to die or loose Bernard down the hill and see if i can squeeze by.  Needless to say the very last part the rock stuck out further then the rest which was of course at a dip. So as I creeped by n try to give it some gas to make it up this one foot incline Bernard just spun in the dirt n rear tire went a little sideways from spinning but of course down the hill direction so I kind laid it over on the rock got off and said Fuck now what.  I try to walk the bike n push but no luck there.  So thought okay about 15-20 back I did see people I’ll go get help.  As I was walking back there were walking towards me.  I signaled for help and the one guy in clear ass English said you need help we heard your motor. Well holly fucking luya the guy spoke perfect English we push Bernard past the rocks and then he ask u want to eat something we are bbqing. I could not pass up the opportunity so I surely agreed and we left Bernard behind and walked back to there house. We talked for awhile had two beers stuffed me full of dead animals and then said I should go because i want to be at camp before dark.  They knew where camp was and said maybe 45 more mins yet.  They insisted on packing me a Togo box of the dead animals but before I left the uncle suggested that he put those rocks there and that’s the old road I have to come back this way and  go around onto the new road (which was not a road a dirt path).  So just to be safe I asked the guys if they would mind helping just in case. We then walked back to Bernard and I managed to get around the rocks with out there help loaded on my panniers on the side and carried on to camp for the night.  I finally did arrive at the horizon unlimited meeting ( the website that inspired me to do this adventures around the world on a motorcycle) As soon as I got there I met Blazo who puts the event on and his partner.  They tell me I can set up camp anywhere I like so I go to the edge of the

camp for the next few days

grounds away from everyone n throw up my tent. I walk back get registered in and see my friend yannis who is the German guy who told me about this event at the border of kosovo and macedonia.  He tells me beer is free and it’s over there so hell yeah why not.  We talk about doing a ride tomorrow to the national park briefly before the presentations started. There were three guys explaining there trips and two of the three guys went through that o so horrible Country called IRAN.  And time and time again they just elaborate and express how much they love the place. In fact the one guy who I believe was about my age pretty much avoided talking about Iran just because he said he could really never do it justice on how amazing of a country that place is so he could never really give it enough credit in a half in a hour presentation that the country 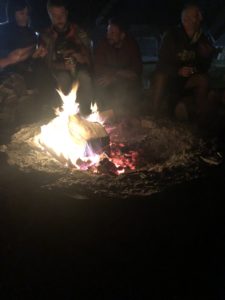 fire pit for the night

deserved. After the presentation yanni about 6 others sat by the fire place and drank till about 3 in the morning.  Aug 10th  wake up at 830am since the sun comes rolling over they hill at 6. Walked up to the main area met up with yanni and blazo and we tried to plan out the ride we were going to do today.   About a hour later yanni and I were all geared up and heading north towards Durmator national park.  We had a stop at one of the rafting spots with this insanely bright turquoise waters.   Next we carried onto the national park and what a freaking site this place was as soon as u arrive.  It takes about 3 hrs to make a full loop of this park 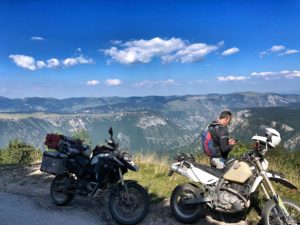 Yannis and I exploring

mainly cause the roads are twisty but also because these one lane roads are actually meant for traffic going both directions. So every turn is like playing Russian roulette. We get half way n there’s three restaurant so yanni I stop for a beer.  After the beer we carry on the other half way around  the park. When we finally get back to where we started we decided to grab food cause it was 5 n today at camp they said the bbqing stsrted at 5 and we still have another hour n half ride minimum back. We grab some dinner 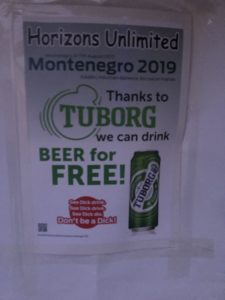 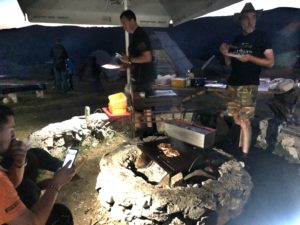 another beer and during this time we find another route we can take back.   After food n beers we were back in the bikes heading south to camp. Now the road back was absolutely fantastic tiny little road with beautiful views great pavement n nice windy turns.  We finally arrived at camp just as it was getting dark. They saved us some bbq and we caught again more presentations. This time it was a couple who rode the same bike and again elaborated on how amazing they thought Iran was and they to agreed with the guy yesterday and said that Iran is a whole presentation on its on.  Afterwards again ended up at the fire sitting around bullshit telling stories n drinking the free beer. Aug 11th  woke up everyone was starting to fade out said good bye to yannis as he was heading south to Greece. Back up my camp n said my last good byes to everyone else i spoke with Blazo for a bit about taking another off road n where to go rafting. He showed my the route to take and suggested I go camping at the Bosnia border but on the montenegro side.  So thank him with my whole freaking heart in the experience and started my off road journey for the day.  First I stop at a restaurant in town which was owned by the uncle who put those rocks on 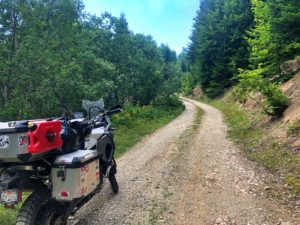 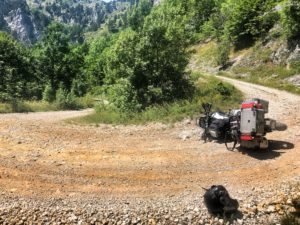 the road where I got stuck who also served me bbq  a few days ago.  Then on the offroad trail to Bosnia border I was heading. About two hrs in to this day of riding off road Bernard and I went down.  I was a little throttle thirsty around a turn b Bernard just spun in a circle as I kinda hop off.  Of course he fell down hill so as I failed twice at trying to lift my 700 pd baby I decided to say Fuck it bags are coming off and then right  away I was able to get Bernard up reattach my side bags and carry on.  Rode for about 4 hrs off road before hitting durmator national park once again this time only going half way then carry out the northern part of the park towards my camp which was at the river that separates Montenegro and Bosnia.  I arrived at camp for the night which was packed with freaking French kids.  Well if hearing the French language was not annoying enough imagine fucking 39 annoying ass kids speaking French.  So I toss up my tent far away from 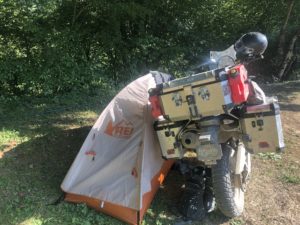 camp for the night

those fuckers. Planned my rafting trip out for the  following day and grab dinner for the night.  Aug 12 up early because of the annoying ass kids who speak French and went down along the water to just relax before 10:30 am when the rafting trip shall start.  The time come we get geared up and head about 30 mins up stream get our safety briefing and in no time were in this beautiful bluish green water but only 50 degrees.  The Rapids were pretty blah since the river is at the lowest points during the 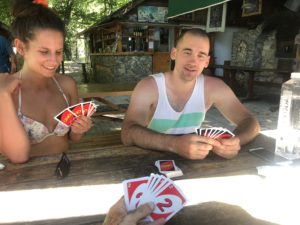 a few games of uno

month of August.  Was told April may is when it’s good when all the snow is melting.  We did get to stop half way down the river to jump off of a rock which was enjoyable even with the shocking 50 degree water.  Eventually we arrived back at camp and we all got a free shot of rakijh afterwards.  the one couple I became friends with invited me for beers and some games of uno so took them up in the offer as well would kill time before they served lunch. Lunch was finally served and afterwards they cruised out and I just decided to claim the hammock and just let the day fade away till dinner.